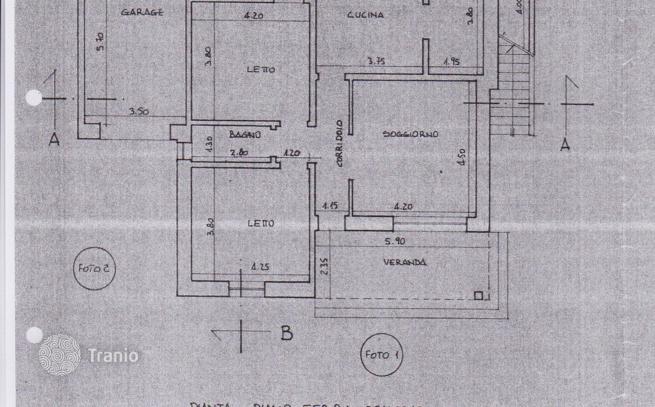 Villa with garden, 100 meters from the sea

Villa of about 130 square meters covered, furnished, consisting of porch, living room, hallway, kitchen, dining room, en suite bathroom, outdoor shower, 2 bedrooms, garage. The plot of land on which the villa measure lies an area of approx. 720. The latter develops a volume superior to that building built. Therefore it could build about 200 more square meters. The property has two entrances, one directly from the coastal front, one rear side street. The villa is located in the near town of Santa Maria di Leuca.

Santa Maria di Leuca is 130 km from the Airport of Salento (Brindisi) and 90 km from Lecce.

Leuca is a popular tourist destination especially for the nineteenth-century villas, built according to different styles for the most part by Ruggeri and Rossi architects. Towards the end of the nineteenth century there were to be precise 43 villas, many of which are now disused or appear changed considerably compared to the past.

Santa Maria di Leuca In the past it was administratively divided between the municipality of GAGLIANO CAPE for the part where there is the Sanctuary of Santa Maria de Finibus Terrae, and the municipality of CASTRIGNANO CAPE, for the part between the tip Ristola and Punta Meliso. Leuca lies entirely in the municipality of Cape Castrignano. More precisely, it means the area above the promontory of Leuca to Santa Maria on which there are the Basilica and the lighthouse (which with its height of 48.60 meters and its location at 102 meters above sea level is one of the most important in Italy), while the Marina di Leuca is located lower and is between tip Meliso east, at the foot of the promontory, and points west Ristola, extreme southern tip of Salento.

Since October 2006, the territory of Santa Maria di Leuca is part of the Costa Park Otranto — Santa Maria di Leuca and Tricase Forest, established by the Puglia Region in order to safeguard the east coast of Salento, rich in precious architectural monuments and important species of animals and plant.

A famous legend has it that Santa Maria di Leuca (or maybe Porto Badisco) would be the first landing of Aeneas. He would later landed here St. Peter, who arrived from Palestine, began his work of evangelization, and then on to Rome. The passage of San Pietro is also celebrated by the Corinthian column of 1694 erected on the forecourt of the Basilica, recently restored.

A staircase of 296 steps links the Basilica to the harbor below by framing the monumental waterfall Apulian Aqueduct that, finishing in Leuca, flows into the sea.

A Leuca is one of several Italian offices of the Air Force, who daily make weather forecasts

If this property wasn’t for you, take a look at other apartments for sale in Italy.

You can see more apartments for sale in Santa Maria di Leuca elsewhere on our website.

How to buy property with Tranio

Send us an enquiry with an approximate description of the property or investment project you’re interested in.

After clarifying your enquiry, we will introduce you to our partners and/or local agents.

We will help you to select suitable options. Tranio does not charge a commission for this — the property price remains the same as if you contacted our partner directly.

You then view the property or properties you have chosen. Our partners or agents from Tranio's European offices will meet you in situ.

Having chosen the best property, you will sign the sales or investment agreement (for development).