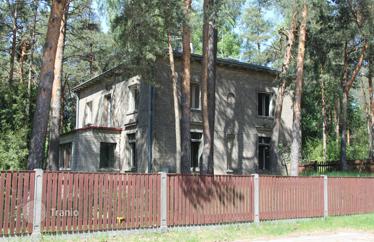 House in Mezaparks for sale!

630,000 €
Check availability of the property
Send the listing to yourself
Features

House in one of the most prestigeous place to live — Mezhaparks! Queit street with little traffic, wealthy neighbors.

Mezhaparks (in German known also as Kaiserwald) is a neighbourhood in North Central Riga. The name is literally translated as 'forest park'. In 17th century Mezhapark neighbourhood went by the name Kaiserwald, because in 1621 Sweden King Gustav II built a camp for his army on this place. This name remained until 1923, when it was officially changed to Mezhapark. Until the middle of 19th century farmers lived on this place, they provided Riga with their production. It was also the place of rest for city people during summer time. At the end of 19th century the main engineer of Riga thought of building villas in the lake Kishezers region. At the beginning of 20th century the active building has begun. More then 100 dwelling-houses were built. But the situation changed after World War II, when beautiful villas were nationalized and after this many houses were left. In the 1990s houses were given back to their owners. Nowadays Mezhapark is one of the most prestigious regions of the city.

The house is situated on a land plot of 1823 m², the land has nice natural landscape.

We can help you with your Latvian residency permit application when buying a property worth €250,000 or more.

If this property wasn’t for you, take a look at other houses for sale in Latvia.

You can see more houses for sale in Northern District elsewhere on our website.

How to buy property with Tranio

Send us an enquiry with an approximate description of the property or investment project you’re interested in.

After clarifying your enquiry, we will introduce you to our partners and/or local agents.

We will help you to select suitable options. Tranio does not charge a commission for this — the property price remains the same as if you contacted our partner directly.

You then view the property or properties you have chosen. Our partners or agents from Tranio's European offices will meet you in situ.

Having chosen the best property, you will sign the sales or investment agreement (for development).