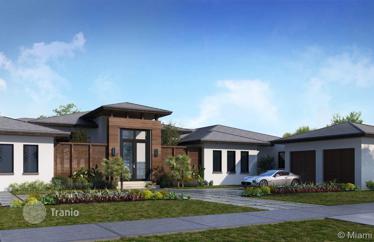 Modern villa with a backyard, a pool, a barbecue area, a patio and two garages, Miami, USA

4,490,000 $
Check availability of the property
Send the listing to yourself
Features

One of a kind villa located in a prestigious area. The backyard has a pool with a spa, a barbecue area and a relaxation area. An access road leads to two garages. The territory of the villa is guarded, equipped with light dimmers, speakers and cameras, surrounded by a lush and well-groomed landscape.

The house has six bedrooms, six bathrooms, a toilet, a living room, a dining room and a kitchen.

You can see more houses, villas, cottages for sale in Miami elsewhere on our website.

Enquire about this villa

Kseniya Kolesnikova
Real Estate Expert Tranio in Miami
How we work
Send a request
I confirm that I have read and accept to the Privacy Policy and Personal Data Processing Guidelines.
Send a request